Women of the Year & Ann-Marie Powell

Ann-Marie to speak about her ‘Passion for Plants’ 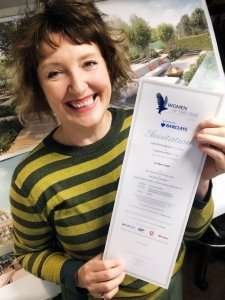 Ann-Marie is honoured, proud, (and slightly self-conscious!) about being nominated as a Woman of the Year at the annual Women of the Year Lunch and Awards sponsored by Barclays.  The annual event (this year being held on Monday 14th October 2019 at the Royal Lancaster London), is the longest running celebration of extraordinary women in the UK. Each year a nominating council elects just 450 women from all walks of life to attend The Women of the Year Lunch, each handpicked for their achievements and contribution to society. Each guest is regarded as a ‘Woman of the Year’ and represents not only themselves but also the millions of extraordinary women who make a difference every day. In a world which often celebrates ‘celebrity’, Women of the Year sets itself apart by honouring real achievement and diversity.

Ann-Marie says of her nomination “I confess I was humbled to hear of my nomination as a Woman of the Year; for over twenty years I have been working in landscape design and horticulture (Full disclosure… it hasn’t always been a bed of roses!), and if this nomination promotes our industry and inspires, in any way, more women to become involved in our wonderful world of horticulture, then I would be so very delighted”.

Women of the Year has recognised, celebrated and inspired women of all backgrounds since 1955, when it was founded by the late Lady Tony (Antonella) Lothian OBE with Lady Georgina Coleridge and Odette Hallowes.

Recognising women’s achievements in 1955 was almost unheard of, and Lady Lothian’s aim was to put the record straight and bring together a wide cross-section of working women who had distinguished themselves in their careers or their communities. At a time when the concept of career networking for women was unknown, the initial concept is as important today as it was sixty years ago.  Women of the Year was, and remains, a gathering for inspirational women and an opportunity to hear the views of world-famous women on important issues.

At the Lunch, a bishop sits with a farmer, a financier with a community worker and a famous actor with a health care worker. There are no divisions.  Awards are presented to exceptional women who have each proved an inspiration to others through their courage, selflessness and dedication both in the UK and globally. Recent winners include Fahma Mohamed, Christina Noble, Beatrice Mtetwa, Waris Dirie, Andrea Coleman, The Dagenham Women Machinists, The 2012 Team GB Olympic & Paralympic, P.D. James, Doreen Lawrence, Zainab Salbi, Katie Piper and Dr Nawal El Saadawi. Other winners include, Lulu, Annie Lennox, Susie Hart, Tina Turner, Dame Kelly Holmes, Claire Hicks and Jasvinder Sanghera.

The legacy of each lunch is outstanding. New friendships are formed, support networks founded and better understanding engendered.

Women of the Year has recognised, celebrated and inspired women of all backgrounds for over 60 years and continues to shine a light on extraordinary women through an annual lunch, lecture and on-going foundation work.